Femme Fatale And Harley-Davidson Take On The Ultimate Fighter

Femme Fatale's models did a great job of promoting one of our newest clients, “Harley-Davidson,” at last weeks Ulimate Fighter event in Quebec City. Harley-Davidson is one of the official sponsors of UFC and chose Femme Fatale for their event staffing. The event, held at Colisee Pepsi in Quebec City, featured the main fight of Bisping vs. Kennedy. The fight was a part of the Ultimate Fighter reality television series and attracted more than 5,000 guests. Femme Fatale had three promotional models on location to promote the Harley-Davidson brand and interact with guests and gather marketing information through a voluntary survey. Our beautiful, outgoing and charming promo models easily met the marketing goals set out by our client.

We have employed promo models at UFC events in the past, but in a different capacity. We have previously teamed up with Warner Brothers to promote their movie, “The Hangover 2,” at UFC 129. We are very pleased to be returning to the high energy arenas and working with such a recognizable and iconic brand like Harley-Davidson. The event models did a great job in Quebec City and we are looking forward to working with them again.

The next event we have planned with the motorcycle manufacturer is going to take place in Port Dover on Friday June 13th, 2014. This upcoming event will be a motorcycle mecca. Tens of thousands of bikers and bike enthusiasts are expected to descend upon the small town on the north shore of Lake Erie. We are excited about the big event and looking forward to wowing the crowds with our exceptional team of promotional models. 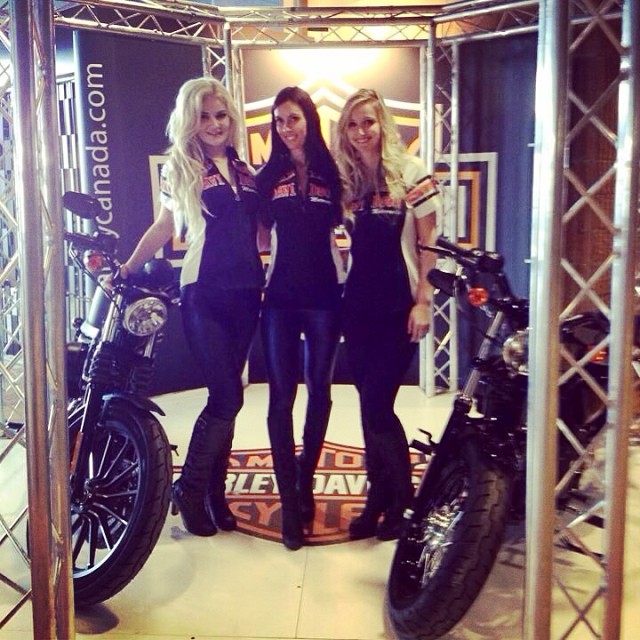